HOW TO UNLOCK ANY IPHONE 6 WITHOUT THE PASSCODE

That should safely find and replace your hex values all at once. 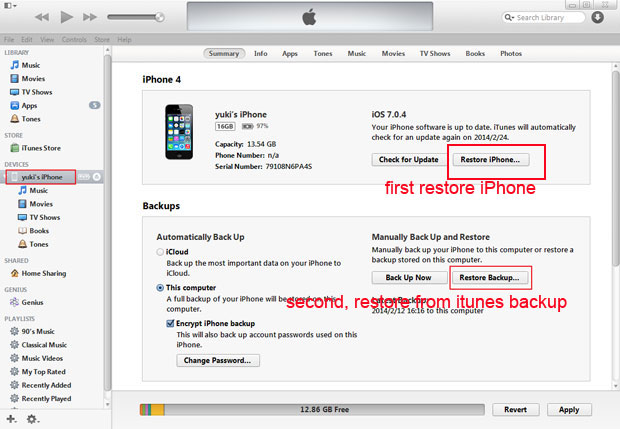 I hate Apple products, so thanks to some knowledgeable people and programs such as this by Apple Fans, I was able to fix my kids iPod so there are no more "Parental Restrictions" even though none were ever set. I even had to fight to get the iPod to take the backup I wanted it to thanks to iTunes , nothing can ever be simple can it? Hi guys, just wanted to share with that i tried this and it worked out fine for me.

You saved my day! Dude thank you!!! I was skeptical about tweaking code and stuff, but this worked like a charm! It reset the restrictions pass to and now I can turn them off! I am using Windows 8 btw and I found those files. Paguei pelo programa mas valeu. Congui a senha de restrições! It worked! On an 3GS running iOS 6. Well done and thank you for providing such clear, bomb-proof instructions. Hi Alexandra, You rock!! Thanks a lot. A long time ago I had setup a restriction code on my iPhone 4 to stop my younger brother from making in-app purchases.

But now when I went to reset my device, I couldn't as I realised I had forgotten my restrictions code. I searched online everywhere but I didn't find a way of resetting this code. I had saved a local backup on my Mac and I came across this software. At first I was VERY sceptical of it working but the choice was between losing all my data and taking a leap of faith by paying for the home license. I went for the latter and am I glad! It's worked as promised, resetting my restrictions code to '' now I've turned the damn thing off - lesson learned! My phone is running iOS 7. If you are in a similar predicament, would definitely recommend!

This worked without issues. It took about 30 minutes. Thanks for the help. Three things I encountered My iTunes was set to automatically back up when I plug in the device, so I ended up editing the files and then needing to do it all again after iTunes immediately overwrote the backup before I could restore from it. After disabling the auto-sync in the iTunes preferences, I was able to restore. While I've used TextPad for many years and have a full paid license, I could not get it to actually edit the manifest. In the end, HxD-Hexeditor did the trick for me. Also, the SHA-1 hash generation site above kept giving me errors.

I'm a thirteen year old girl, my parents put a child tracker on my phone and locked it with parental controls. This saved my life!

Thanks so much!!! Holy crap, i am so amazed that this worked, even on ios 7. Thank you soooo much!!! It perfectly works on my iPhone 5 with iOS 7. Thanks for sharing this precious method. PS: I don't get why step 14 should be that tricky? Worked like a charm. Did this from a Windows 7 box with the same tools for Windows.

You did a fabulous job with this guide. My hat is off! You're a lifesaver!! I was able to finally get the program to work. Could not use SRIron browser which is basically Chrome. Had to check for my emailed key in IE and copied it to clipboard which automatically put it in the key field for me.

Program is a lifesaver for anyone with an iPhone, iPad, or iPod. I have an iPad 3 and Vista. Worked great! But this time, I wrote down my passcodes so at least I have them somewhere. Nothing is better than the release from stress! I need help every time I try to spring bored it won't change on the jailbreak plz help. This is awesome and it works. It took 20 minutes of time. I will Recommend these steps to everyone. I had enabled the restrictions on while i installed iphone finder.

After trying all the steps i can not restore the phone to the modified backup, itunes says the restore cant be made because there is not enough space free on the iphone. Paul: Hi, photos and videos take up the most space in the backup and on your phone.

You can import media files from the device to your computer from time to time to save space and make your backup smaller. Photos and videos imported this way can always be synced back to the device. Good luck! Andrea: Hi, the last step is to restore the modified backup to your iPhone. The data from that backup restored means your PIN will be reset to "". Don't forget to keep a copy of your original backup in case something goes wrong!

I was also succesful! With those tools and your instruction, it worked on the first attempt! Thanks a lot! IT's just amazing ,i cant believe that it's working prefect ,i was so worried ,even i'm not good programmer to understand these but still i did it and working well Really appreciate ,Thank you. On a first try I used WinVi32 as a hex editor and it didn't work: Couldn't restore the backup file iTunes said it was damaged.

Just did this stuff, totally thought it wouldnt work, worked without a hitch, if when your doing it the part where your writing stuff under SBParentalControlsEnabled and it says you have unsuccesful attempts at unlocking it, just write in where he says to and it works fine. After 27 failed attempts at trying to guess a code I don't remember setting, I found and have bookmarked this solution.

Worked with no issues. Great piece of work! Thank you for sharing it to us folks who forget their passwords and don't have all that technical knowledge. Good that you are there! I'm no computer wizard, and even I could follow your wonderful directions to reset a forgotten 'Restrictions Passcode' in my iPad.